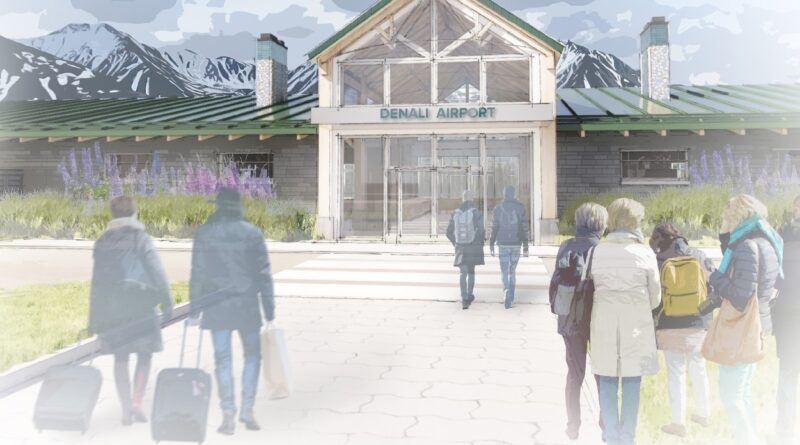 Lead image is an artist rendering of passenger terminal taken from Doyon, Ltd.’s “Denali Airport: A Direct Destination in the Heart of Alaska”

This fall Alaska newspapers (News-Miner, ADN) reported on a proposal by Alaska Native Corporation Doyon, Limited to construct a new regional airport in the Denali Borough capable of landing jets flying from the Lower 48. Doyon laid out the concept in a 22-page booklet that included an evaluation of seven possible airport locations within a 60-minute drive of the Denali National Park entrance and a description of the airport facilities which would include an 6,300-foot runway, parking, a passenger terminal, an interpretive trail, and an access road. Both the terminal and the interpretive trail are proposed to provide visitors with an immediate connection to the local landscape, resources, ecology, and Native culture.

The airport proposal arises from a renewed interest by Doyon in developing its tourism business. The Native Corporation has for many years owned and operated the Kantishna Roadhouse, including both overnight and day-tour operations. It is also the majority partner in the Doyon-Aramark Joint Venture that holds the Denali concession for tour buses, transit buses, and entrance area commercial services (Morino Grill, Riley Creek Mercantile). The corporation did not seem particularly interested in expanding its tourism division, even selling off its east-end Denali property at McKinley Village. However, recently, Doyon entered into a new tourism joint venture with Southeast village corporation Huna Totem called Na-Dena’. So far, Na-Dena’ has acquired a motorcoach tour company that presently operates only in Southeast. That may be just the start, as Doyon envisions developing a “Cultural Corridor” that stretches from Southeast up through the interior, bringing tourists to “underexplored” visitor opportunities. A Doyon representative noted that some villages in its region are becoming more interested in the possibility of sustainable tourism. While not everyone would agree that Denali is “underexplored,” Doyon nonetheless sees the regional airport as a linchpin in this new effort, and feels that the region’s infrastructure is under-developed. Doyon has also argued that Denali needs faster access because visitors waste a day of their vacation in transit to the park.

Other reasons – and partners – for a new airport

The regional airport proposal is being driven by Doyon, but the corporation has found willing potential partners at the Denali Borough and in the Alaska Department of Transportation and Public Facilities (AKDOT&PF). Both the Borough and AKDOT&PF are concerned that the Borough’s limited airport infrastructure is unsustainable in its current form. The Healy River airstrip is located on leased Alaska Railroad property. The lease expired in 2017, and the state legislature refused to fund a new long-term lease, so its existence continues tenuously under a “holdover’ provision. The airport is not ideally situated anyway, with difficult winds and poor opportunities for expansion on the railroad property. Meanwhile, use of the airport at Clear is subject to restrictions imposed by the nearby military base, including the possibility of being shut down entirely if the military needs to clear the airspace for its operations. Denali Borough Mayor Clay Walker is also sympathetic to the desire for speedier tourist access to the Borough. As a result, the Borough in particular was very receptive to Doyon’s interest in a new airport and the three entities (Doyon, Borough, AKDOT&PF) have been regularly meeting about the project. The Borough Assembly and Planning Commission both passed supportive resolutions.

Of the seven possible sites identified in the Doyon proposal, the Native corporation prefers a location about 6½ miles southeast of Clear and 3.3 miles east of the Parks Highway. Second-preference is a site just off the Parks Highway about 7 miles north of Healy, on land that the Borough had previously identified as a possible location for an airport.

There is a long slog ahead for Doyon to bring this project to fruition. In its booklet, Doyon projects a 6-year process with the first flights happening in 2028. However, that is likely quite optimistic. AKDOT&PF is preparing to conduct a “Denali Area Airport Study” to determine the best sites for future airport investment. This project is slated to start up in the spring or early summer of 2023. However, AKDOT&PF isn’t beginning with the conclusion that a new regional airport is needed – it will be looking at present needs in the context of all the public airstrips in the Borough, including not only Healy River and Clear but also Kantishna, Summit, and the remote airstrip at Gold King Creek. The State may well conclude that the expense for a 737-capable airport is not justified. Meanwhile, opposition to the airport materialized fairly quickly. While the Fairbanks Daily News-Miner opined that the airport was a good idea, long-time journalist and commentator Dermot Cole no doubt spoke for many Fairbanskans in rebuffing the proposal, noting that the airport would allow tourists to bypass Fairbanks altogether.

DCC is leery of any project that seeks to increase tourism at the already over-crowded entrance to Denali, and are particularly concerned that the airport proposal presages a Doyon interest in expanding visitor volumes headed to its Kantishna property, thus putting more pressure on the capacity-limited Denali Park Road. While Doyon speaks of “underexplored” visitor opportunities and sustainable village tourism, really an airport in the Denali Borough would only be convenient for its Denali operations.

There will be opportunities to learn more and voice opinions. AKDOT&PF will include public involvement opportunities as part of its airport study. Separately, Doyon intends to host a public meeting in the Denali Borough to discuss the proposal, likely next summer.