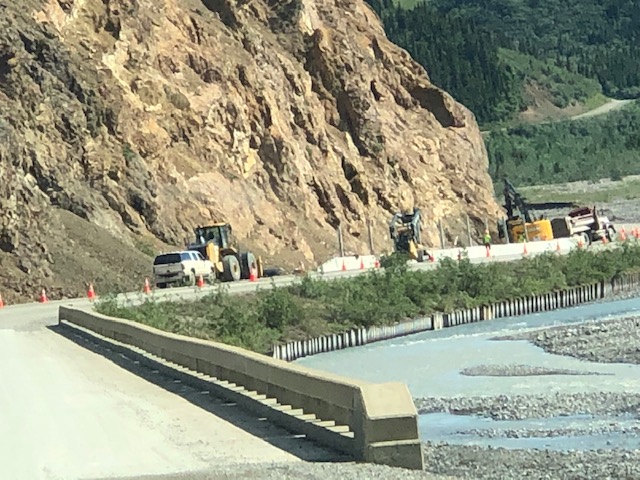 Prompted in part by member concern, DCC has been pressing the National Park Service regarding its decision-making process for mitigating rockfall at Toklat Bluffs – a rock face just east of the Toklat River bridges on the Denali park road. The project was identified as a priority by the federal lands Unstable Slope Management Program as the second greatest safety threat along the park road. NPS authorized the project after labeling the project a Categorical Exclusion under the National Environmental Policy Act (NEPA), meaning that the project did not require an extensive environmental analysis. The project involves creating a rock catchment area at the base of the cliff and shrinking the travel roadway to 24 feet in accordance with Denali’s Road Design Guidelines. Most controversially, it involves the active removal of a large volume of rock from the cliff face itself (“scaling”).

DCC is frustrated about the NPS work at Toklat Bluffs for several reasons. First, we question the need for the project. Long-time drivers of the park road do not feel Toklat Bluffs is a particularly dangerous area for rockfall. To the degree that rocks do fall down, it seems a much less intrusive, catchment-only project could have addressed the issue. NPS cites the conclusions of the Unstable Slope Management Program (USMP) as justification for the larger project, but that program information is not available publicly, making it impossible for DCC – or any other third party – to understand why there is a discrepancy between the USMP’s conclusions and the decades-long experience of many drivers of the park road. The USMP, the project design, and the work itself are all paid for and managed by the Federal Highway Administration (FHWA), which has a long history of devising inappropriate projects on the park road. DCC worries that the availability of funds from FHWA may be a driving force for road projects, rather than actual safety or maintenance needs.

Second, the project is taking place in an unusually important area of habitat. This cliff face represents one of the few places that visitors can see Dall sheep close to the park road. It is also one of the identified “sheep gaps” for which vehicle spacing is a tightly managed standard within the Vehicle Management Plan; a standard that will be comprehensively violated as part of the project. In addition, the rock face is scenically interesting as a distinct geologic feature along the park road. For these reasons alone the use of a Categorical Exclusion seems ill-advised, and contrary to NPS’s own guidelines.

Using a Categorical Exclusion, NPS does not have to look at either the short-term or long-term impacts of the project. While the authorization made a nod to the Dall sheep’s use of the rock face by restricting work to mid-summer dates outside of lambing season, the long-term repercussions are unknown. If the project unintentionally removes important resting ledges the sheep could stop using the area altogether, depriving the sheep of a place of safety and park visitors of a chance to see them close to the road. Potential effects on small rock-dwelling animals like pikas and marmots are completely unknown.

The questionable use of Categorical Exclusions by NPS has grown alarmingly in recent years. In a July 17, 2021, letter to Deputy Superintendent Brooke Merrell, DCC made three requests to NPS in hopes of improving communication and public accountability for future road projects.

We will update our members and readers when NPS responds. We are very interested in observations regarding Toklat Bluffs during and after the current project. Please send any comments to dcc@denalicitizens.org.