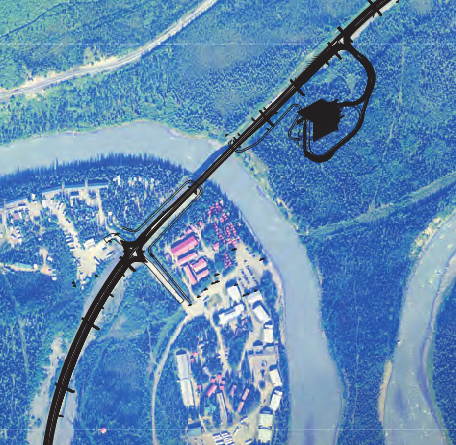 Image extracted from AKDOT&PF graphic, showing footprint of new NPS wayside and trails under the highway.

The area around milepost 231 of the Parks Highway will be under construction starting the summer of 2022 and continuing for a few years. There will be a virtual public meeting Thursday, January 6 from 5:30-7:30pm with staff from the Alaska Department of Transportation & Public Facilities (AKDOT&PF) and construction contractors to hear more about the plans and see visuals. You can find information for joining the Zoom teleconference at https://dot.alaska.gov/nreg/parks231/.

AKDOT&PF initiated this project well over 10 years ago with the intention of improving safety for both motorized and non-motorized visitors in the milepost 231 commercial use area, around Denali Park Village, Denali Grizzly Bear Resort, and the Nenana River bridge.

According to AKDOT&PF manager Carl Heim, the project started as a $10 million idea, then morphed into a $50 million mega job that included replacing the highway bridge over the Nenana River and building a pedestrian tunnel under the road. AKDOT&PF ultimately settled on a modest project funded in the $10-15 million range, with the main goals of improving the Denali Park Village/Grizzly Bear intersection with vehicle turn lanes and creating a safer pedestrian environment.

Simultaneously, NPS will construct a new rest area on the east side of the highway. AKDOT&PF began site preparation for NPS in the summer of 2021 by clearing vegetation. Groundwork for further leveling and paving will resume in the summer of 2022 with the same contractors that are doing the intersection work at Denali Park Village/Grizzly Bear.

According to Jennifer Johnston, an outdoor recreation planner for Denali National Park and Preserve (DNP&P), the layout is not yet finalized, but NPS is estimating about a 2-acre area for the new wayside. The DNP&P welcome sign will be moved within the wayside so visitors won’t have to park on the highway to take pictures of the sign. The area will include parking spots for roughly 26 passenger cars and 19 RVs/buses/cars-with-trailers. There will be covered and uncovered picnic tables, as well as vault toilets with the Sweet-Smelling Technology (similar style as those at the Riley Creek Day Use Area). AKDOT&PF will add northbound and southbound turning lanes on the highway to enter the rest area safely.

At the present time, NPS did not say if they will use the McKinley Village gravel pit for industrial activities during construction. AKDOT&PF’s contractor will use the pit for its highway work, which has raised concerns about noise, heavy equipment, and traffic in the Village View subdivision. AKDOT&PF has adopted some mitigations in response to community feedback.

As for pedestrian safety improvements, that is trickier. The plans are not fully finalized, but both AKDOT&PF and NPS have solutions that are meant to minimize the need for pedestrians crossing the highway to access commercial facilities between Grizzly Bear Cabins, Denali Park Village, the Oxbow and Triple Lakes trailheads, and the DNP&P sign.

AKDOT&PF originally proposed a pedestrian tunnel under the Parks Highway at milepost 231 as part of the “mega” version of the project, but it would have required replacing the entire existing bridge over the Nenana River and installing a wider bridge structure, which proved too costly. AKDOT&PF revised plans and in the summer 2022, they will build a retaining wall and a paved pedestrian/bike path on the south side of the river between the east side (boat launch) and west side (Grizzly Bear Cabins) of the highway. The path will parallel the road about halfway up the roadway embankment, then cross underneath the bridge.

Hikers will access the Triple Lakes trail from the new NPS wayside via a pedestrian path that will go under the north abutment of the existing highway bridge. Short connector paths will lead from the wayside to this underpass, as well as to the existing Oxbow trail.

That leaves the problem for pedestrians to safely cross the river. NPS has secured a Federal Lands Access Program grant to cover the planning and construction of a dedicated pedestrian bridge on the east side of the highway that would go from the south side of the Nenana at the boat launch to the north side, with a trail connecting to the new wayside Since the funding came after the wayside idea, the project will not happen concurrently with the wayside and is slated for a 2026 timeframe. NPS is working to move that funding forward, but for now there is very little information available to the public on this pedestrian bridge proposal.

If NPS constructs any new trails as part of the Nenana River Corridor project, they would also tie into the new wayside and pedestrian bridge. See the prior DCC post on that project, NPS Proposes Nenana River Trails, Campsites.

After quite a bit of discussion among board and community members, the DCC Board of Directors sent a letter to the project manager Carl Heim addressing some problems with the current plan. While we appreciate that something is finally being done about safety in this area, the planned project seems only a half-measure that does not provide a full solution. Read the letter by clicking the link.