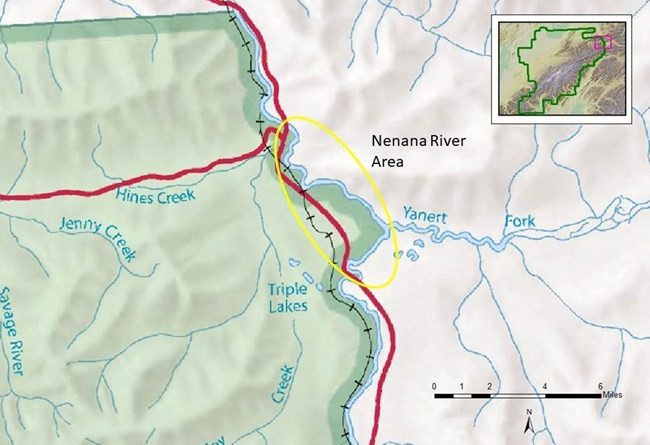 The National Park Service is asking for feedback on conceptual ideas for trails, campsites, and winter use in the “Nenana River area” – the portion of Denali between the Parks Highway and the Nenana River on the east end of the park. This area of Denali falls within the “Old Park” yet lies outside the designated Wilderness area of the Denali backcountry. In the 1997 Entrance Area and Road Corridor (Frontcountry) Development Concept Plan, NPS concluded that this area should have visitor facilities including trails and campsites as part of a strategy to provide more visitor opportunities at the east end of the park to help diminish future demand for bus trips on the park road. While NPS has since implemented most of the other projects in the Frontcountry DCP, the agency has never floated specific proposals for the Nenana River corridor. Now planners have crafted initial proposals that include a narrow hiking trail along the river, a wider multi-use trail closer to the Parks Highway, two small walk-in campgrounds, and groomed winter ski trails. See the full details of the proposals on the Denali website at https://www.nps.gov/dena/getinvolved/plan-nenana-river-trails.htm.

The area has a few existing developments, including the Oxbow Trail on the south, a 1-mile stretch of the Alaska Railroad where the tracks briefly cross to the east side of the highway, a pit that is now a practice target range for rangers, and soon a parking lot and wayside at the south end at milepost 231 (site preparation already begun). The Alaska Railroad tracks may have a particular influence on NPS’s plans, since they pass so close to the river at one point that they pinch off the opportunity to put in the multi-use trail, although the hiking trail could still fit. However, the Alaska Railroad (AKRR) is contemplating moving those tracks to the other side of the Parks Highway as a way to get rid of the at-grade highway crossing, a long-term goal of both the AKRR and the Alaska Department of Transportation and Public Facilities (AKDOT&PF). Such a move would both remove the pinch point and provide a railroad bed that could be used for construction of a portion of the multi-use trail.

DCC supports the overall strategy of providing visitor opportunities that do not require trips out the park road. We do have some specific concerns and suggestions.

NPS does not appear to have a budget or funds designated to implement whatever plan it decides upon. The agency will still need to prepare an environmental compliance document – most likely an Environmental Assessment – presenting specific alternatives before starting any work. However, by providing input at this stage you have the ability to shape the alternatives.