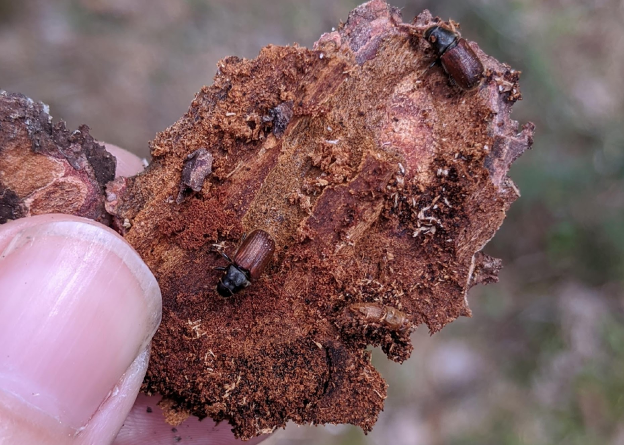 Alaska is in the midst of a spruce bark beetle outbreak, with fatal consequences for vast swaths of spruce trees. The beetles have moved north over the past few years and reached the southern edge of the Denali Borough. No one is certain how far north the infestation will eventually spread, nor the long-term consequences for the ecology of the boreal forest. However, the warmer temperatures experienced in a changing climate may enable the beetles to push further northward, raising concerns for Denali-area landowners and land managers about dying trees and associated impacts related to fire risk, habitat change, and aesthetic disturbance.

According to a mid-January presentation given by foresters from Alaska Division of Forestry and pest management professionals from UAF Cooperative Extension Services, the outbreak began in 2016, although most of the damage was noticed in 2018, followed by a bit of a drop, then upward trends again.

As of 2021 across the Kenai, Copper River Valley, Mat-Su region and the edge of Denali Borough, surveys reveal 191,000 acres of active damage and 1.6 million acres of cumulative damage from 2016-2021. The surveys are a joint effort between the Alaska Division of Forestry and the U.S. Forest Service Health Protection. In Denali Borough alone, the Alaska Division of Forestry surveyed 22,900 acres of active damage in 2021, with 23,700 of cumulative damage from 2016-2021. From the air, affected areas are noticeable because of the branch dieback, resulting in fading needles turning yellow, then red, then gray, as noted in this 2018 photo from the Southcentral area.

To understand how long the outbreak will continue, the potential geographic extent it will reach, and what we as property owners can do, it is best to understand more about the spruce bark beetle.

What is the Spruce Bark Beetle?

Spruce bark beetles are a native species, so they are a normal healthy component of our local forests, are distributed widely across Alaska, and are cyclic. Their population has inflated so much over the past few years that they have become a major tree-killing species, and they keep creeping north. During the previous outbreak in the 1990s, the beetles were contained within the Copper River Valley.

The adults typically have reddish to dark brown wings with a darker (almost black) head and thorax. They have a cylindrical shaped body, and are about one-fourth inch long by one-eighth inch wide in size.

Most commonly, they operate and attack on a two-year life cycle. What this means is they begin flying during the spring and summer, starting around temperatures of 60 degrees and above, so typically May through September. The females find a mate, land on a host tree (spruce), and excavate a tunnel to lay eggs under the bark through the winter. The emerging larvae create more tunnels by feeding on the phloem layer within the bark. The larvae typically overwinter again, and emerge the following spring as adults. In some cases, this cycle can last one year or three years, but two is the most typical.

What trees are they attacking?

The obvious answer is spruce, but specifically they attack native species including Sitka, white, and Lutz (the hybrid between Sitka and white). Black spruce trees are attacked less commonly. As for ornamental spruce found in Alaska, they attack Norway and Colorado Blue.

They feed on injured, stressed, or recently killed trees, standing or down. They do not feast on spruce firewood. Weather patterns exacerbate the availability of these trees and thus increase the spruce bark beetle population—hot, dry weather stresses the trees and winds create blow-downs.

It is unknown how many spruce bark beetles it takes to kill a tree, although when experts pull back bark on newly-killed trees, they have seen thousands of beetles.

What are the signs of a spruce bark beetle attack?

You won’t see spruce bark beetles crawling around the tree because they are burrowing under the bark. Among the first signs to look for are circular one-eighth inch holes on the bark, which is the same width as the beetle itself. Look from chest high on the tree down to the base of the trunk. Early on, there may just be a few holes, but they will increase as more beetles infest the tree. Other signs are reddish-brown boring dust on the bark at the tree bark, as well as peeling bark, although other insects can have these impacts on trees as well. Pitch tubes, which appear as sticky globules of resin, are the tree’s defense mechanism, and offer another sign of a beetle infestation.

What can we do?

The Alaska Division of Forestry and0 other organizations are tracking the outbreak, conducting surveys, and testing large-scale management methods. However, it is likely that natural factors will determine how long the outbreak lasts and its ultimate impacts on boreal forest ecology.

Will colder temperatures slow the populations of spruce bark beetles? Winters with extended temperatures of -40 or lower would help kill off the larva, but snowpack also needs to be low, as they will crawl down the tree to insulate in the bark below the snow.

Which direction will the wind blow and when? The beetles fly in the direction of the wind, so that could either continue their march north, or turn it in a new direction.

Will there be more natural predators? As of now, the only known predators are woodpeckers, who feed on the burrowing beetles in the spruce trees

Concerned property owners could help mitigate the spread by giving spruce trees some extra care. The trees near homes, structures and utility lines would be a good start, as their death could cause a greater impact. Water the most important trees, especially during hot and dry weather. Avoid compacting the soil around the tree. Mulch is good, but make sure to spread it at least in a 3-foot diameter with a maximum depth of 3-4 inches. Pesticide sprays are certainly a personal decision and can be used as a preventive method, however, there are many precautions and research to think about before going that route.

Firewood gatherers often express concern about the spruce bark beetle. However, beetles do not feed on spruce firewood as it is long dead, and only recently-dead material can serve as a host. Spruce trees killed by bark beetles can still be used as firewood, and even other wood products. The key is to peel bark, stack the wood away from live spruce, and use the pile as soon as it’s dry.

For more information, visit alaskasprucebeetle.org for a one-stop-shop on all things spruce bark beetle.

One thought on “The Beetles Move North”